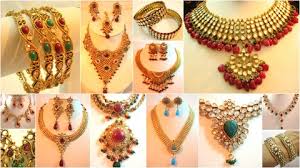 In the year 2005, the Union Govt. has introduced the Central Excise Duty @ 2% on branded Jewellery. However, there was mere collection of Rs. 16 Crores only till 2008 and therefore in the year 2009, it was withdrawn.

Again in the Union Budget 2011, the duty was re-introduced @1% on branded precious metal jewellary. With effect from 17.03.2012, it was further extended to all branded and unbranded jewellary. However, due to lots of agitation across the county, the same has been withdrawn.

Again Union Budget 2016-17 has proposed to levy Central Excise duty @ 1% on all the Jewellery articles except silver Jewellery not studded with studded with diamonds, ruby, emerald or sapphire.

This has led to widespread protests and strikes taking place in the entire country on account of the facts that procedures are cumbersome and it may not be possible to be judiciously followed by this largely un-organised sector.

Another reason might be the fact this is the industry which is working on a huge parallel in cash.

Also a high level committee under the chairmanship of Dr. Ashok Lahiri has also been formed to look into the nitty gritty of Excise on Jewellery.

Indian jewellers have been on an indefinite strike since the beginning of March 2016 protesting against the Budget proposal to levy 1 per cent excise duty on non-silver jewellery. After almost strike for a period of 43 days, finally it has been called off on 13th April 2016.

After this basic background and history, let’s understand the various provisions of the Central excise in the simplest manner.

Central Excise is applicable on manufacture of excisable goods. So, there should be manufacturing for levy of Central Excise.
(It means all the jewelers engaged only in trading activity are automatically out of purview of Central excise).

The term manufacture would mean “any process whereby the goods processed would change as to name, character or use as is known in the market”.

Let’s first understand the meaning of this ‘Deemed fiction’. Deeming means a situation which does not exist in reality but need to assume as if it is there in reality.

The effect would be nothing but all the relevant provisions of the Central Excise is applicable for deemed manufacturing also.

Who is liable for Central Excise – Job Worker or the Owner

As a general rule in the Central Excise, a person who is doing the manufacturing activity is liable for excise irrespective of the ownership of the goods.

If the same rule is being applied for the Jeweler business then the procedure would be very complex and cumbersome.

Therefore, for the Jeweler sector, Special provision is being specified in Rule 12AA which is produced as below:

“the person who gets the article of jewellary falling under heading 7113 or 7114 produced or manufactured on his behalf on job work basis will be liable to pay duty. “

However, the said SSI exemption (i.e. exemption based on value of clearance) is not available if manufacturer affixes the brand name of another person.

Excise duty is required to be paid only at the time of removal from the factory i.e. factory to mean all the premises where the manufacturing activity is being carried out.  (To be paid in aggregate on monthly / quarterly basis)

Once the goods are removed on payment of duty, subsequent transactions are free from Central Excise Duty. It is unlike Sales Tax (VAT) where the duty / tax is required to be charged at each stage of sales.

Periodicity of Payment of Excise Duty

The rate of duty on the Jewellery are as follows:

No duty is payable if goods are exported in terms of Central Excise Rules, 2002.

Which premises are required to be registered?

Assessment under central excise is factory based.

Any premise satisfying the definition of factory is required to get registration unless specifically exempted.

If the person has been operating from more than one factory, generally separate registration certificate shall be obtained for each of such factories.

However for Jewellery sector there is special provision wherein centralized registration is permitted.

When registration is required to be obtained

Registration needs to be obtained within 30 days from the date when liability to pay duty arises.

Along with this basic explanation, following points are also required to be taken care of while dealing with Central Excise on the Jeweler Industry:

-          Difference between the House mark against brand name / trade name.

-          Amount of duty when customer has given gold in exchange of new jewellary instead of money.

-          Manufacturing and selling of jewellary from the same location.

-          Duty liability when goods are received for repairs / reconditioning etc.

-          Sale of scrap, powder generated out of manufacturing process.

-          Calculation of basic limit for clearances whether unit wise or factory wise.

For any clarification or further information, you may contact us.